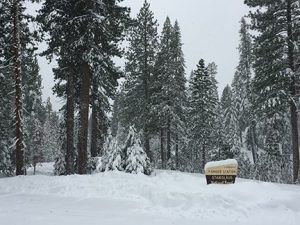 A few light showers are possible at times through Friday. Another winter storm system is forecast to move in by Friday evening.

The National Weather Service has issued a Winter Storm Watch for the Sierra Nevada above 7,000 feet, from Friday evening through late Saturday night.

Total snow accumulations will range from ten inches to two feet above the 7,000 foot elevation.

Winds may gust as high as fifty-five mph.

The storm that follows this weekend’s storm will bring an abundance of tropical moisture into California from Tuesday into Wednesday. There will be substantial precipitation and a high threat of significant flooding. This will be especially true for the Mother Lode and the Sierra Nevada.

Mild air associated with this storm may keep the snow levels well above the 9.000 foot elevation.

Heavy rainfall on top of a large melting snow pack could bring localized flash flooding, washed out roads and bridges, mud slides, rock slides and debris flows, particularly in the vicinity of the burn scars.

Rising water levels are anticipated on rivers and streams during the middle of next week, especially over the higher terrain where the combination of rain and melting snow will accelerate the runoff.

Minor street flooding could occur in urban areas and in other areas of normally poor drainage.

Areas that have recently flooded or normally do flood during heavy rain events, could easily flood again.

If you live in a flood prone area or near streams and rivers, this would be a good time to prepare to have an evacuation plan in place. The plan should be known in the event that high water becomes a threat to your safety.

A Winter Storm Watch means there is potential for significant snow, sleet or ice accumulations that may impact travel. Continue to monitor the latest forecasts.