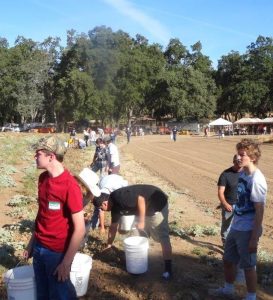 Sonora, CA – As it threatened to do, the Tuolumne County Farm Bureau (TCFB) has filed a suit aiming at blocking the partial sale of Wildcat Ranch.

TCFB officials confirm today that its attorneys filed paperwork Monday against the Sonora Union High School District “in pursuit of its goal to protect and promote agriculture.” The ranch, owned by the district since the mid-1980s, houses the high school’s agricultural program. However, late last year, outgoing school board members voted to sell part of it to the Park Foundation, which plans to establish a community park there.

As reported here, on Jan. 22 trustees held a closed session discussion to discuss a cease and desist letter sent by TCFB several days earlier. In it, the farm bureau maintained that district trustees had violated the Brown Act because members of the Park Foundation sat in during some closed session board negotiations that were not accessible to other members of the public.

Following the session, Superintendent Dr. Mark Miller told Clarke Broadcasting the sale was moving forward and that following a forthcoming written response from the district’s attorney to the bureau, attorneys for both sides would decide how to proceed.

In addition of accusing the district of holding illegal meetings, TCFB alleges in a media release that fiduciary duties were breached in approving the sale. “The school district made a conscious decision to sacrifice land and the district’s own long-term
security for a short-term cash infusion,” TCFB President Ken Fleming stated.

TCFB maintains that the district received more than $4.6 million from its earlier sale of the district’s Jamestown campus property but that most of the proceeds were spent on other needs rather than on agricultural education.

Fleming said, “The district needs to fulfill the promises it made to the community when it sold the Jamestown agriculture campus in the 1980s, to rebuild and maintain high school agricultural education and sustain 4-H, FFA and other youth programs.” He added, “Other than construction of a well, fencing, outbuildings and animal pens, most of the improvements at Wildcat Ranch have resulted from the hard work of students, parents and generous community members.”

Fleming further stated, “Tuolumne County Farm Bureau remains committed to holding the district to its promise to agricultural students. We have made every effort to represent both agriculture students and the interests of all district residents but the previous school board was determined to sell much of the ranch, even at below-market value under a contract that fails to protect the district in case of default by the buyer.” He blamed the previous board’s action to approve the sale, noting that it could have easily avoided a lawsuit by allowing the current school board to continue discussions about Wildcat Ranch in what he termed “a fair and equitable manner.”

Wednesday evening, Clarke Broadcasting talked with District Superintendent Dr. Mark Miller, who confirmed he had heard rumors of the filing. However, he shared, “I have not been served with any papers or any documentation letting the district know that we have indeed had papers filed against us.” He declined further comment, saying the process is not officially underway until the district receives service of the court papers.