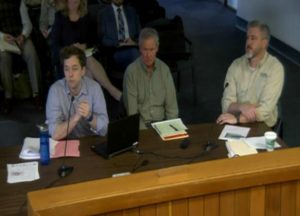 Sonora, CA — Part of a $70-million federal resiliency grant awarded to the region following the Rim Fire is $22-million to construct a biomass facility.

However, there are growing concerns about whether it will meet federally set timelines.

Yesterday the board heard an update about efforts to develop the project being overseen by the state’s Sierra Nevada Conservancy, and the tentative plan is to allow 4-5 businesses to share the site. It could create 50 full-time jobs, as well as 100-150 indirect jobs.

Companies would have to submit proposals, and they would also have to bring funding to the table, with the overall project expected to cost around $40-million. The businesses would likely focus on small scale biomass power, a small scale sawmill, post and pole manufacturing and firewood bundling.

Two potential sites have been identified, one along Camage Road, and another in the Chinese Camp area. It was noted that 7-10 acres is the ideal property size. The Camage Avenue site is only about five acres, which is of concern, but the Chinese Camp location would be a further distance from the biomass source, creating an increase in costs for transportation.

The facility must be in operation and grant expenditures spent by 2022. A big concern is that if a lawsuit is filed, it could delay construction. There are also questions about the impact of PG&E’s bankruptcy.

Supervisor Sherri Brenann initially voiced concerns about meeting the deadline. Board member Anaiah Kirk also chimed in, and noted that there are two mills already in place in the county, so he questioned whether there are other ways to spend the $22-million to make the community more fire safe.

Board Chair Karl Rodefer, speaking to the Sierra Nevada Conservancy officials, and project consultants, concluded, “I have never in my life seen anything take so much time to get so little distance down the road…Dealing with HUD has been extremely painful…The message that you delivered today is a good start in a new direction.”

The Sierra Nevada Conservancy has agreed to provide quarterly updates on the efforts to meet the upcoming deadlines.

Rodefer added, “I don’t want anyone to think we are ungrateful for this, but we are not going to be very grateful if we can’t execute it.”

Rodefer acknowledged that if the project can meet deadlines, it could provide an economic boom, but if not, it will be two years of wasted efforts.