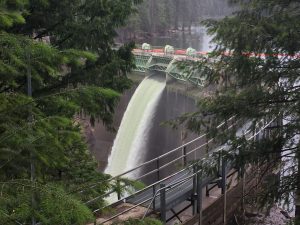 Sonora, CA — There are some questions still lingering, and even potential opportunities on the horizon, for Tuolumne County’s largest water supplier following the bankruptcy of PG&E.

General Manager Pattison spoke about his desire to be proactive over the coming years to improve the district’s aging and complex infrastructure. He noted that one of the district’s long-term goals is to reduce the number of water treatment plants from 11 down to two.

In addition, he was asked if it is realistic that Tuolumne County, or TUD, will ever acquire its own water rights. TUD utilizes Lyons Reservoir and Pinecrest Lake as its primary water supply as part of a decades old agreement with PG&E.

Pattison stated, “As some people may now, the Tuolumne Utilities District, on behalf of many residents of Tuolumne County, about 55,000, benefit from a 1983 agreement with Pacific Gas and Electric. Now that they (PG&E) are in bankruptcy, one my chief concerns is the continuation of that 1983 contract and PG&E’s ability to honor that contract. PG&E’s statement is that they will continue to provide services during this bankruptcy, and we have not seen any reason not to believe that. I think they have been responsive with the recent power outages. But, we are concerned about potential uncertainty in regards to water supply.”

He hinted that the TUD Board of Directors will look at wide ranging possibilities over the coming months to increase the district’s supply, including the possibility of acquiring some of PG&E assets. It would take various community partnerships, and stakeholders, coming together for a common cause. Similar to how Tuolumne County has undertaken a recent fire initiative, Pattison would like to see TUD lead a similar type water supply initiative. It is something the board will discuss at future meetings.

He then concluded, “Do we have enough money for all of this? That, at the end of the day, is the big question. All I can say right now is that we are looking into it. We need to determine what that cost is, where we are at right now, and together as a community, and partnering agencies, how we get from here to there.”

Other tidbits from the interview were that by the end of the year, the district hopes to put the finishing touches on an ongoing collaborative fire break project at Lyons Reservoir. Partners include the Sierra Nevada Conservancy, PG&E, Sierra Pacific, the Highway 108 FireSafe Council, California Conservation Corps. and the Tuolumne Rancheria Fire Department.

Another positive note is that the recent storms have quelled any concerns about water supply over the upcoming summer months.

On a more challenging note, the start of a major dredging project at Phoenix Lake will likely be delayed until 2020 due to the need to acquire permits.

To find the entire 30-minute show, where additional projects and topics were discussed, click here.