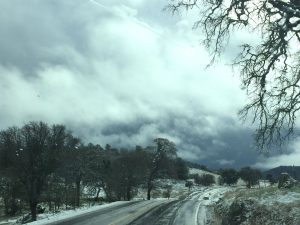 Sonora, CA — The wintry mix of stormy weather is bringing a range of travel conditions through the lower elevations.

Sonora residents may have felt like they were in a snow globe while those in Copperopolis were hard pressed to see any snowflakes. A midmorning ride between Angels Camp and Sonora via Highways 4 and 49/108 by way of OByrnes Ferry Road, revealed a stark contrast in low country snow levels.

Parts of Angels Camp appeared to get less than three inches of white stuff, although slushy conditions and minor flooding on secondary roads made for some tense driving moments. Angels Camp, which gets its share of hail from time to time, has not seen much in the way of measurable snow for about a decade. A caravan of PG&E trucks moving through Copperopolis along Highway 4 noticably made its way towards the Murphys-Arnold area. At least two AT&T trucks were spotted between Copperopolis and Jamestown.

While temperatures remained in the mid 30s, the ride between Copperopolis over the Lake Tulloch Bridge to Highway 49/108 showed partially sunny skies — no visible snow — and hills that are now emerald green from the wet weather. Waterfalls trickling into Tulloch from the Table Mountain hillside were noticeable from the OByrnes Ferry Road bridge crossing with minor streaming into the corkscrewing roadway on the Tuolumne County side.

Just before the 11 a.m. hour, the flashing Caltrans signboard west of the Yosemite Junction still noted that chains were required east of Jamestown. Just into the town, snow flurries thickened to a full on snowfall and snow levels appeared to be in the three to four-inch range. A driver of a pulled-over truck was installing chains near a passing Caltrans snowplow.

Stockton Road into Sonora remained very slushy and with temperatures measuring around freezing, the roadway could continue to present a challenge later. In downtown Sonora was still a wintry scene with falling snow adding to accumulations on snow-covered roofs, yards and parking lots.

While the sun appeared in downtown Sonora just around noon time with the mercury still reading around 32 and a hard freeze expected tonight, drivers will likely be dealing with frozen slush and black ice conditions.

To view a selection of related images, click into the image box slideshow and to view the ride along video between Yosemite Junction and downtown Sonora, click the video link.