An Elderly Driver Ends Up In A Precarious Position 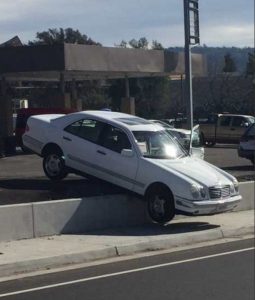 Sonora, CA – An elderly Sonora woman got into a bit of a jam when she mistakenly created her own exit from a local car wash at the intersection of Mono Way and Greenley Road.

The pictures in the image box show how the 82-year-old women tried to turn her Mercedes sedan onto Greenely Road from the Corner Car Wash located at 852 Mono Way in Sonora but ended up getting stuck on the cement wall. Sonora Police spokesperson Krishna Livingston reports, “It ended up being driver error. She believed from her visual vantage point that she could just go forward, so she continued.”

Livingston shares that the woman was trying to find the entrance to the Adventist Health Sonora’s Health Pavilion and this is not the first time this has happened. She cautions motorists, “There have been other vehicles that have become high centered on that wall. So, we just encourage people to be aware of the changes that have been made to that lot and know that there is no exit onto Greenely Road from the car wash.” The only entrance and exit is onto Mono Way. However, there is an entrance and exit on Greenely Road and Mono Way to the health pavilion.

Luckily, the woman was not injured. Tow crews were able to remove the vehicle from the wall without impacting traffic. Her name is not being released because she was not ticketed in the incident, according to Livingston, who adds that drugs nor alcohol played a role in the crash that happened around 11:15 a.m. Tuesday.