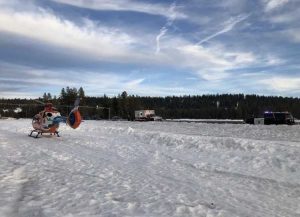 Bear Valley, CA — The CHP has released more details about a crash that resulted in a victim being airlifted twice from the area.

It happened Thursday afternoon at 2:30pm off Highway 4 near Hermit Valley. 52-year-old Karina Woodman of San Jose was piloting a snowmobile that was also carrying a 14-year-old male passenger. The CHP reports that when another snowmobile slowed down in front of her she inadvertently hit the accelerator instead of the brakes. She was forced to swerve to avoid the other vehicle and went off the path into a tree. She and the passenger were both ejected from the snowmobile. A CAL Fire helicopter responded to help extricate Woodman from the crash site. She was placed into the helicopter and flown to Bear Valley Ski Resort, where she was then loaded into a second helicopter (air ambulance) and taken to Sutter Roseville Medical Center.

The second passenger sustained “moderate injuries” and was transported to Adventist Health Sonora.