Sierra Snowpack At 67-Percent Of Average 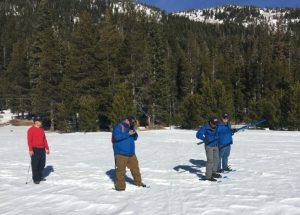 Sonora, CA — The snowpack in the Sierra Nevada is only 67-percent of average for this time of year, but officials note that January and February are typically wet months.

The California Department of Water Resources used the hundreds of electronic sensors placed across the Sierra Nevada to formulate the 67-percent figure. That said, the first manual snowpack survey of the year conducted yesterday at Phillips Station near Lake Tahoe showed a reading of 80-percent of average, showing that some areas of the Sierra are doing better than others.

John King, CA Department of Water Resources Engineer says, “While these results are below average, they are a stark contrast to where we were last year when there were just patches of snow at this location. The season is still early. Anything is possible from now until May.”

State Climatologist, Dr. Mark Anderson, says, “We are only through the first of the three wettest months of the season. December, January and February are typically when we accumulate half of our annual precipitation.”

The snowpack numbers are expected to receive a boost this weekend when a storm system passes through the region. Click here to view the latest information from the National Weather Service.