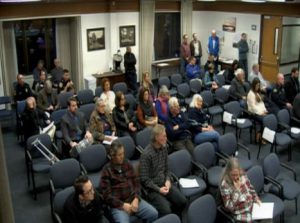 Sonora, CA — After being in development for over six years, the Tuolumne County Board of Supervisors approved a new General Plan.

It serves as a constitution for land use decisions in the county. The last update was in 1996 and the argument was made at the special supervisors meeting today that the document has become outdated and in need of a revamp.

During the first 45 minutes of the meeting county staff gave an overview of the plan and responded to some of the concerns that have been raised in the community during the review process.

The public was then given a chance to speak, and 19 people gave their opinions about the plan. Unlike last month’s planning commission meeting, an overwhelming majority today were in favor of the plan. Speakers included business leaders like Ron Kopf and Jeff Redoutey of the Tuolumne Business Council, Mark Banks, Mike Lemke, Frank Helm and incoming District Three Supervisor Anaiah Kirk. A major argument among those in favor was the need to make it easier to create more needed housing in the county through a clearer and more concise General Plan. Among those opposed were John Buckley of the Central Sierra Environmental Resource Center and Sharon Marovich of the Tuolumne Heritage Committee. Arguments were made that the plan does little to protect cultural resources.

The individual supervisors then had a chance to make comments and ask questions.

District Two Supervisor Randy Hanvelt congratulated the staff on putting together the plan, but noted there are lots of compromises, and it is not a perfect document. He felt delaying passage of the plan, though, would be a mistake.

District Five Supervisor Karl Rodefer thanked everyone that came out to weigh in, both pro and con. He also thanked the staff for the countless hours put into developing the plan. In addition, he praised the staff’s public outreach efforts.

District One Supervisor Sherri Brennan also added that it is not a perfect document, but is a living document that has the opportunity to evolve. Those sentiments were also echoed by Board Chair John Gray.

District Three Supervisor Evan Royce noted that execution of the plan is important as a new board takes over next week with two new members. He also called today a historic moment, adding, “This is a plan that will guide our future. The intent and the work that was put into this was filled with goodness and people that care.”

In their final votes as supervisor, Royce motioned in favor, and it was seconded by Hanvelt. The final vote was then 5-0 in favor.