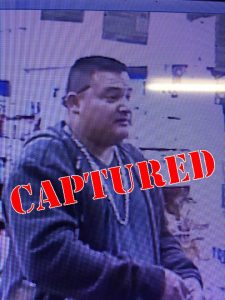 Update at 12:40pm: The main suspect, and two accomplices that hindered the investigation, are in custody in connection to the shooting death of Newman Police Corporal Ronil Singh.

Stanislaus County Sheriff Adam Christianson announced this afternoon that 32-year-old Gustavo Perez Arriaga was arrested at a home in Bakersfield in connection to the death of Corporal Singh. In addition, two others were arrested for helping Arriaga escape to Bakersfield after the alleged crime. They are 25-year-old Adrian Virgen and 27-year-old Erik Razo Quiroz. Sheriff Christianson added that one of those men is a brother of Arriaga and the other is a co-worker.

Arriaga, an illegal immigrant, was in the process of trying to get back to Mexico, when captured in Bakersfield. It was noted that he had been working as a farm laborer in the Central Valley for the past couple of years. He has two prior arrests for DUI and is a member of the Surenos street gang.

Sheriff Christianson also passionately spoke his disdain for state legislation that created sanctuary policies for illegal immigrants. He stated, “We can’t ignore the fact that this could have been prevented. Under SB 54 in California, based on two arrests for DUI and other active warrants that this criminal has out there, law enforcement would have been prohibited from sharing any information with ICE about this criminal gang member. Ladies and gentlemen, this is not how you protect a community.”

Virgen and Quiroz are both in Stanislaus County Jail and Arriaga is in the process of being transported to Stanislaus County. It was noted that Corporal Singh’s assigned handcuffs were used to place the suspect under arrest. The Bakersfield home had been under surveillance for 24 hours.

Original story posted at 10:55am: Kern County, CA — The Stanislaus County Sheriff’s Office will hold a press conference this afternoon to speak about major developments regarding the shooting death of Newman Police Corporal Ronil Singh.

The Sheriff’s Office has not released any further details, but news outlets like CNN are reporting that the shooting suspect was arrested in Kern County. In addition, the Mayor of the City of Turlock, which is in Stanislaus County, announced an arrest on social media. She indicated that a suspect has been taken into custody and that the sheriff’s office will provide more information at the noon press conference.

The suspect, whose name has not been released, was in the country illegally, according to earlier statements by Stanislaus County Sheriff Adam Christianson. Corporal Singh was killed in a shootout after trying to pull over the suspect for DUI this past Wednesday morning. Corporal Singh leaves behind a wife and five month old son.

Tuolumne was one of four counties included in an earlier Blue Alert, signaling that a violent offender was on the loose, and could be in the area. We’ll pass along more information as it becomes available.