Counterfeiter Caught At A Local Casino 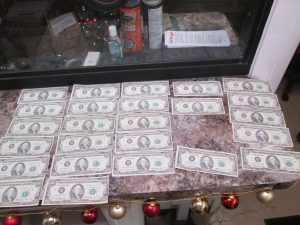 Tuolumne, CA – A Fresno man is accused of burglary after he allegedly tried to pass several fake bills totaling over $2,000.

Black Oak Casino security contacted the Tuolumne County Sheriff’s Office to report they had detained a Fresno man for forgery and counterfeiting. When deputies arrived at the casino, security had 51-year-old Baron Bower in custody. Security officials say Bower left the casino after he tried to pass several $100 bills. Officers found Bower hiding underneath his car in the casino parking lot.

Deputies searched Bower’s vehicle and uncovered $2,500 worth of fake $100 bills along with a small baggie containing methamphetamine and cocaine. They also discovered materials to make phony money including a printer and several ink cartridges. All can be viewed in the pictures in the image box.

Sheriff’s officials say Bower confessed to attempting to pass the fake bills in the casino. He faces charges of burglary, forgery, and possession of a controlled substance. His bail was set at $15,000.