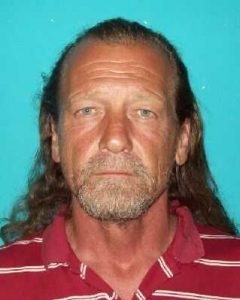 East Sonora, CA – A Tuolumne man was arrested after he threatened to stab a deputy who was questioning him.

Tuolumne County Sheriff’s dispatch was alerted to two belligerent men sitting outside of the TJ Maxx store around 7 p.m. last Friday in the Junction Shopping Center located on Mono Way in East Sonora recently. When a deputy began to question the men he noticed a half drunk bottle of whiskey next to 58-year-old Michael Connolly Jr. With his speech slurred and a strong odor of an alcoholic on him, Connolly swore at the deputy. When the deputy asked if he had any weapons, Connelly told him “Ya, I have a straight knife on me and I’m going to slit your (expletive) throat,” according to sheriff’s officials.

While being taken into custody, the deputy says Connolly became combative and grabbed a hold of the bench to pull away. He was subdued and handcuffed with the help from an off duty Sheriff’s Sergeant. Connolly faces disorderly conduct with alcohol, consuming alcohol in a prohibited location and obstructing and resisting an officer. His bail was set at $20,000.