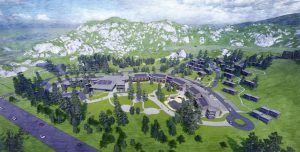 The Hanji Corporation is planning to construct a lodge and other amenities across 63 acres situated at the northeast corner of the intersection of Sawmill Mountain Road and Highway 120. The Terra Vi Lodge Yosemite would include 140 guest rooms, 25 cabins, a market, lodge building, event space and other supporting structures.

Board of Supervisors chair John Gray recently told Clarke Broadcasting that the project would be on a similar scale to the nearby Rush Creek Lodge that opened in 2016.

County documents note that improvements to the intersection of Highway 120 and Sawmill Mountain Road are also expected as part of the project, but the exact improvements will be determined during the environmental review.

Habitat types on the project site include Sierran mixed conifer, montane hardwood conifer and ponderosa pine. Much of the site was impacted by the 2013 Rim Fire. As part of the State EIR guidelines, there is a comment period currently underway for the project running through December 28.

You can find further details by clicking here.