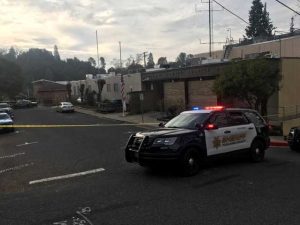 Area cordoned off where package was found

Sonora, CA – A bomb squad was called in Sunday morning after a “suspicious gift” was left at the Tuolumne County Sheriff’s Office in Sonora.

The package was left by a woman in front of the building, which also houses the jail, located at 28 Lower Sunset Drive at around 9 a.m. The words “flammable” and “explosive” were written on the box. Tuolumne County Sheriff’s spokesperson Sgt. Andreas Benson reports that prompted deputies to cordon off the area in front of the office. She shares that the package was then treated as a possible “hazardous device” and the Calaveras County Sheriff’s Office Bomb Squad was called in to inspect the package. Subsequently, it was disposed of by exploding it as can be seen in the video in the image box. That exposed the scarf and ornament inside the box.

Deputies were able to locate the woman nearby and she was acting bizarrely, according to Sgt. Benson, who indicates the woman was not arrested but advised of the severity of what happened and told not to come back to the office unless she was reporting a crime. Luckily there were no injuries reported in the incident.