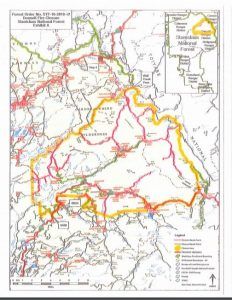 Sonora, CA – The Stanislaus National Forest Donnell Fire closure order was supposed to be lifted at the end of this year, instead it will go into the spring of next year

The order signed by Forest Supervisor Jason Kuiken was slated to end on Dec. 31 of this year. Kuiken detailed, “The original forest order was signed to protect the public from risk of hazard trees, the high potential for debris flow, as well as the risk from rock fall and flooding,”

The extended order will run through May 31st of next year. Kuiken explained his decision, stating, “The risks remain high. This will allow the area to stabilize during the winter season.”

The order stipulates that the public is not allowed to enter, use roads or trails within the burn scar of the Donnell Fire. Anyone breaking the order could be subjected to a fine of not more than $5,000 for an individual or $10,000 for an organization or up to six months in jail, or both.  Kuiken advises that the forest will conduct additional safety assessments in the spring to reevaluate the area’s condition and risk from the fire’s impact. Click here for a link to the forest order map.

The Donnell Fire ignited on the evening of Aug. 1 near Donnell Lake on Highway 108 east of Pinecrest. Forest fire officials relay that it burned more than 57,000 acres and destroyed 135 structures. Just this week and more than four months later, the blaze was officially called extinguished on Monday, Dec. 17.