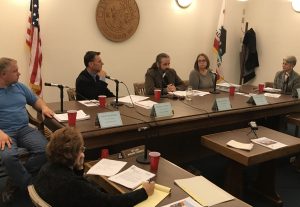 Sonora, CA — The Sonora City Council did not get the timeframe it wanted to make a decision on whether to exit its joint powers agreement with Tuolumne County related to the Tuolumne County Economic Development Authority (TCEDA), and it will decide whether a reduced time is adequate.

Although the TCEDA joint powers agreement requires a 180-day notice prior to the new fiscal year (July 1) to exit it, the city asked county supervisors to approve reducing that notice to 90-days in order to review management and financial audits following a recent Grand Jury Report. Along with that request, the council also gave an ultimatum to walk if the 90 days was not allotted.

As earlier reported here, on Tuesday after some fiery debate, the supervisors instead voted to give the council less time to consider continued support for the TCEDA by reducing the notice to 120 days. The council has called for a special meeting. It will be tomorrow (Thursday, Dec. 20) at Sonora City Hall located at 94 North Washington Street beginning at 4 p.m. The only item on the agenda is to vote on whether to accept the 60-day reduction for notice of withdrawal (120 days total.)