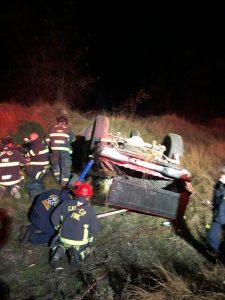 Update at 9:30am: The CHP has released the name of a Calaveras man killed in a crash on Milton Road. 26-year-old Barry Godwin of Burson was driving a 2005 GMC pickup truck near the intersection of South Gulch Road when he lost control of the truck going into a curve.  It overturned multiple times. Godwin was pronounced dead by arriving first responders. The CHP reports that the crash is still under investigation and it is uncertain if drugs or alcohol played a contributing factor.  It happened at around 1:45am on Sunday.

Original story posted at 7:20am: Milton, CA — There was a fatal crash near the town of Milton in Calaveras County early yesterday morning.

Limited details are currently available, but the Calaveras Consolidated Fire Protection District reports that it occurred around 1:50am on Milton Road near South Gulch Road. First responders found a pickup truck had gone off the roadway and overturned. The driver of the truck was killed in the crash. The name of the victim has not yet been released. Other agencies that responded include the CHP, CAL Fire, American Legion Ambulance and the Calaveras County Sheriff’s Office.