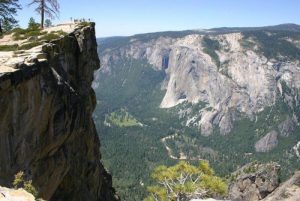 Park officials are recovering the bodies this morning. The park has not released any details on the pair, other than to say it is a male and a female. The incident is under investigation. We’ll pass along more information when it becomes available.

Taft Point is a popular spot that has views of Yosemite Valley, Yosemite Falls and El Capitan. It is situated at an elevation over 7,500 feet and is west of Glacier Point in the park.