Mother Lode Athletic Legend Inducted Into Another Hall of Fame 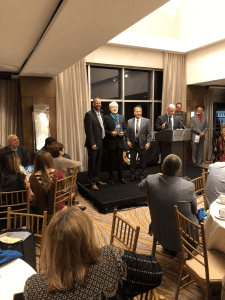 San Andreas, CA — A man who spent over a half-century playing, coaching or running Mother Lode sports collected more honors over the weekend.

For the past ten years Rich Cathcart has served as Mother Lode League Commissioner but his place in the region’s athletic history goes back 55 years.

A gifted Bret Harte High multi-sport athlete from 1963-67, following college and a brief stint elsewhere he returned in 1972 to coach and teach at his alma mater; from 1995-2014 he served as athletic director. For this astonishing run, Cathcart can rightfully claim he may well be the single most influential figure in the history of Bret Harte High athletics.

Along with being inducted as part of Bret Harte High’s Inaugural Hall Of Fame Class (more details here) during festivities over the school’s recent Homecoming Weekend, last night Cathcart was also among the honorees at the 2018 Sac-Joaquin Section Hall of Fame banquet.