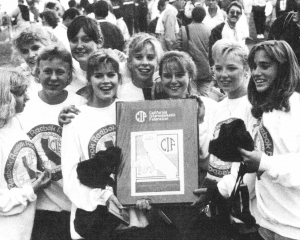 Angels Camp, CA — Ahead of preparing to let out for the summer, Bret Harte High officials are announcing fall plans to honor the school’s first Athletic Hall of Fame inductees.

Athletic Director Jerry Rucker shares the idea came from an athletic directors’ conference last fall where Merced High School officials talked about theirs. “So we started putting a steering committee together to organize it and went around, checking…how other schools set up theirs up and we came up with our plan and just got it going,” he recounts.

After establishing categories into four sections — athletes, coaches, friends of Bret Harte Athletics and special teams — the committee, coaches and others generated nominations. Forming part of the inaugural class’s core, Rucker shares was the 1988-89 Girls Cross Country Team. “[They] basically had a lot of the same runners so we decided to combine those together — and it was our first State Championship,” he explains, further illuminating how it would be a strong choice for the first Hall of Fame team honor.

Individual inductees were considered primarily on their achievements as high school student athletes and coaches at Bret Harte, although character values, during and after their high school years, are also stated as a major consideration. Although future plans, according to Rucker, will include efforts to inaugurate student-athletes from “way back,” the 2018 class has representatives who span a range of school years between 1951 and 2000. The complete list of this year’s 19 inductees follows at the end of this story.

The induction ceremony is slated to take place during a “Hall of Fame Weekend” scheduled Friday and Saturday, Sept. 28-29. Honorees will be introduced at the home football game Friday and feted at the Inaugural Induction Saturday evening.

Rucker notes that members of the public are invited to the event, which will be held at Mark Twain Hall inside the Calaveras County Fairgrounds. Dinner tickets, priced at $30 each will go on sale Aug. 15. For more information, go to the Bret Harte High Athletics Hall of Fame webpage at or call Bret Harte Athletics at 209 736 2507.