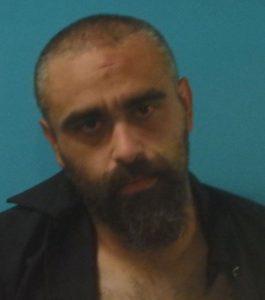 Sonora, CA – A man facing felony domestic violence charges for choking his girlfriend became combative during his arrest at a Sonora business — injuring one officer.

Sonora police report that officers responded to a tip that suspect, Adric Robert White, was seen on Wednesday around 8 p.m. at the Throttle Jockeys motorcycle repair shop on 578 West Stockton Street. White was wanted for allegedly choked his girlfriend so hard that it caused blood vessels in her eye to pop and left bruises on her neck.

As patrol vehicles pulled up to the business, police relay that lights inside the shop went out. Additionally, a motorcycle could be heard shutting off and a person was seen running into the building. After officers repeatedly knocked on the front door, the man inside yelled out and then exited the business. While doing so, police spokesperson Sgt. Tim Wertz says that White suddenly became argumentative and aggressive with officers during his arrested. He details, “As we were walking him to the car, White dropped to the ground. He told officers that they had to drag him to the car and he wasn’t going to go easily. When we got him to the jail he was refusing to get out the patrol car.”

Sgt. Wertz shares that one officer was injured during the scuffle with a cut to his forehead. White faces felony corporal Injury on spouse or cohabitant and resisting/obstructing arrest. His bail was set at $35,000.