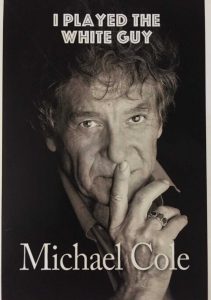 This year is the 50th Anniversary of the television premiere of the Mod Squad. The show was on ABC from 1968 through 1973.

Actor Michael Cole will visit Sonora this weekend and he was Thursday’s KVML “Newsmaker of the Day”.

The Mod Squad starred Cole, Peggy Lipton and Clarence Williams III. The show was produced and created by Aaron Spelling and Danny Thomas.

Cole will be at Legends Books, Antiques and Old Fashioned Soda Fountain in downtown Sonora beginning at 2 PM, signing his autobiography titled, “I Played The White Guy”. The book is available as both a hard cover and in paperback.

The book gives an often humorous and always brutally honest account of his life, his career, his meteoric highs and suicidal lows. Cole reveals what it was like to be famous, idolized by millions, and recognized all over the world, while at the same time struggling with internal demons – insecurities fostered by abandonment and rejection, and fueled by alcohol. It is Cole’s hope that readers will be inspired by his story of redemption as he continues to cherish his life one day at a time.

Cole appeared in numerous films and TV shows including Gunsmoke, Wonder Woman, The Love Boat and CHiPs, Murder, She Wrote, Fantasy Island, and Diagnosis Murder. Later, Cole appeared in Stephen King’s two-part made-for-TV movie It, which aired in 1990, as the older version of the disturbed Henry Bowers. In 1991, he joined the cast of ABC’s General Hospital in the role of Harlan Barrett.

But it really was his role on Mod Squad as Pete Cochrane, a troubled youth turned crime fighter, that made Cole an international celebrity.

Cole continues to act in various film and television projects, and he looks forward to visiting his friends and fans in the Mother Lode.

Legends is located at 131 S Washington Street in Sonora, CA.