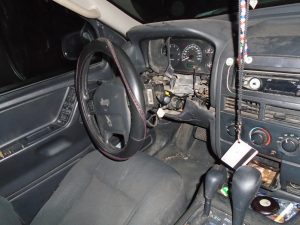 Jamestown, CA — A deputy disrupted a thief trying to get away in a stolen vehicle – prompting a call for the public’s help to catch the thief.

The Tuolumne County Sheriff’s Deputy stumbled upon a stolen Jeep as he was going west on Campo Seco Road in Jamestown around 2 a.m. on Saturday.  The SUV was stopped in the eastbound lane with its headlights on and when he passed, the deputy heard the engine roar and saw the vehicle lurch forward before it stalled. The deputy turned around to assist the driver who then took off running.

Deputies combed the area but only found a broken fence post at an Oakmont Court home and a camouflage, flat bill baseball cap on top of a shed there, but no suspect. A check inside the Jeep revealed a damaged steering column and the ignition assembly on the front passenger seat. The owner of the vehicle was contacted and confirmed that it was stolen Friday night from a Jamestown home on Preston Lane.

Anyone who may have seen anything suspicious in the areas of Campo Seco Road or Preston Lane Apartments on Saturday (Sept. 8th), please call TCSO at 209-533-5815.