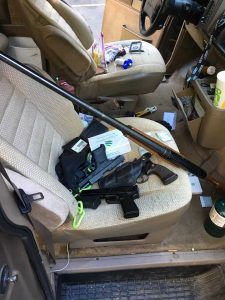 Cedar Ridge, CA – Cedar Ridge residents took to their phones calling Tuolumne Sheriff’s dispatch and once on the scene deputies discovered several firearms in a minivan and arrested one suspect.

Monday, residents reported hearing gunshots in the area. Once on the scene, a deputy was flagged down by a neighbor who suggested he look for a brown minivan that was seen in the neighborhood at the same time the shots were heard. While searching the area, the deputy spotted the minivan at Cedar Ridge Lake with two men inside.  19-year-old Cameron Walker of Sonora was arrested after a search of him and the van uncovered several firearms and stolen property, including one of the guns.

Sheriff’s officials are praising the residents for helping keep stolen guns off the streets. The investigation is ongoing as detectives are working to identify and return the stolen items to their rightful owners.