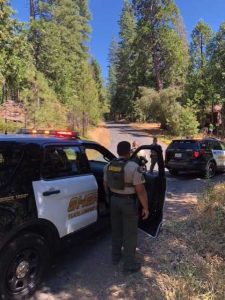 Update at 3:05 p.m.: Tuolumne County Sheriff’s spokesperson Andrea Benson tells Clarke Broadcasting that the suspect is in custody. The “stay in doors” notice to the public is no longer in place. Sgt. Benson says deputies remain on scene “piecing together exactly what happened.” No further details are being released at this time. Further details on the incident are below.

Original post at 2:50 p.m.: Mi-Wuk Village, CA — There is plenty of activity going on in Mi-Wuk Village as Tuolumne County Sheriff’s Deputies are responding to the report of a man possibly discharging a rifle in the area of Pine Lake Drive.

Sheriff’s spokesperson Andrea Benson tells Clarke Broadcasting that the man is wearing shorts and reportedly carrying a riffle. They are requesting that residents to stay inside. The public, including motorists, are also being asking  to stay out of the area until further notice. She adds that law enforcement is on scene investigating. No further details are being released at this time. We will bring you more details as soon as they come into the news center.