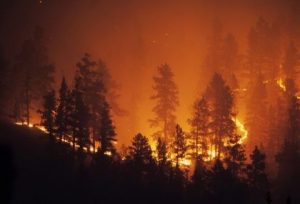 The National Weather Service has issued a Red Flag Warning for the Stanislaus National Forest, which is in effect until 11 PM tonight.

Relative humidity has started to increase with onshore flow, but will take through this evening to increase.

Afternoon minimum humidities of ten to twenty percent are expected, with morning humidity recoveries as low as twenty to thirty percent.

West to southwest wind gusts will range between twenty-five to thirty-five mph.

The highest threat will be in the vicinity of the Donnell Fire and the exposed ridges.

A Red Flag Warning means that critical fire weather conditions are either occurring now, or will shortly. A combination of strong winds, low relative humidity, and warm temperatures can contribute to extreme fire behavior.