Some Close Calls On The Grid Iron 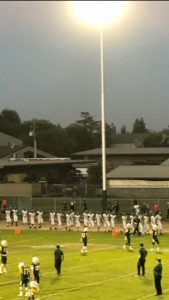 The Sonora High Wildcats lost a literal slugfest Friday night to Hilmar 39-20.
Hilmar drew first blood early in the game when Bryan Millan hauled in a 42 yard pass and with the extra point the score was 7-0. Issac Sharp, who had a huge game last week for the Yellowjackets broke a 78 yard touchdown run at the end of the first quarter and after the extra point, Hilmar was up 14-0.

Sonora’s defense would give up no points in the second quarter and the offense put a nice drive together, culminating with Jake Gookin stepping to his left and charging 3 yards into the end zone. After converting the point after attempt, it was Sonora 7, Hilmar 14 at halftime.

The Yellowjackets’ Sharp grabbed a pass and scampered 55 yards for a touchdown and the kick would be good, taking Hilmar’s lead to 21-7. Gookin answered back with a big run of his own going 57 yards and putting the Wildcats within one, Sonora 14 Hilmar 21.

The fourth quarter became a scoring fest.  Hilmar quarterback Ryan Teixeira would keep the ball on the option and score from 36 yards out, but the point after failed. Hilmar lead 27-14. Gookin would cap a Sonora drive from 9 yards out and the Wildcats kick attempt would fail, cutting the lead to Sonora 20, Hilmar 27. Sharp would break another huge run and turn on the jets to go 80 yards for a Yellowjackets touchdown, but another failed attempt only added six and the score was Hilmar 33, Sonora 20. Texeira would get the call again and score from 26 yards out and another failed attempt made the final score Hilmar 39, Sonora 20.

The scoreboard does not show how well the Wildcats played last night against a very talented and athletic Hilmar team. Checking the unofficial stats, all of the Yellowjackets’ scores were from 20 plus yards, something Sonora will have to correct for next week’s game against Merrill West High School in Tracy.

Summerville’s defense looked outstanding for the majority of this ball game and Octavian Hernandez is making a bigger name for himself each week. This week to start the ball game, Hernandez stripped a Huskie runner and recovered the fumble. On the next few possessions, Hernandez led the Bears’ blitzing efforts and prevented many first downs at the beginning of this contest.

Summerville’s offense looked very stagnant again this week, having to settle for a Chris Saint John 35 yard field goal to give the Bears a 3-0 lead. Before the half, Huskies’ Quarterback Steven Morris worked short yardage throws connecting with multiple wide outs, before finding the end zone giving the Huskies a 6-3 lead at the half.

The second half of this game was a slow go. Hughson was able to put more points on the board but miss a two-point conversation, making the score 12-3 in the final four minutes. Bears Sophomore Quarterback Jayden Brocchini put together his best drive of the night, connecting with Saint John for a 28 yard touchdown, each player’s first touchdown of the season, brought the score to 12-9.

An onside kick attempt ended up being recovered by the Bears giving them an opportunity to comeback. On a 4th and 1, Brocchini was flushed out to the pocket to his left and at the last second floated the ball to Saint John who seemingly lost his footing and fell with the ball parallel to him on the turf. Summerville’s comeback came up short, but this defense shows great signs of hope for the rest of the season. Next Friday Summerville heads out on the road to play Pittman High.

Bret Harte High School could not get the jump on El Dorado losing 21-16. The team has a bye week next week. Calaveras High came within three points but could not get the win against Ripon. The final scoreboard read 24-21. They take on Bradshaw Christian next Friday at home.