Firefighters Trying To Keep Boot Fire Away From Structures 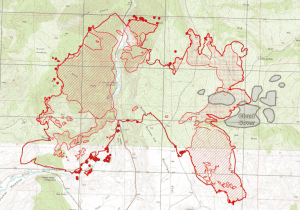 Mono County, CA — The Boot Fire that is impacting Highway 108 Sonora Pass has grown to 6,873 acres and it is back to zero containment.

The Boot Fire was 100 percent contained on September 17, a timeline of news stories is here.

Yesterday morning it was around 4,600 acres with three percent containment.

Mandatory evacuation orders remain in place for Fales Hog Springs, Devil’s Gate Pass, Swauger Creek and the Marine Corps Mountain Warfare Training Center. Speaking about the latter, incident command spokesperson John Schuler tells Clarke Broadcasting, “We’ve been working closely with the Marine Corps to get their training cadets out of there. The warfare center is not completely evacuated. Essential employees are still there, so you still have law enforcement, the fire department and some commanding officers on the base.”

The goal is to keep it east of Swauger Creek, south of Deep Creek, east of the Mountain Warfare Training Center and north of Devil’s Gate. Southwest winds are expected to increase after two o’clock this afternoon, which could lead to another very active day for the fire.

A mix of air and ground resources are attacking the fire. There are currently seven helicopters on scene and two CL 415 water scoopers. The air resources are dropping both water and retardant. The fire is currently very calm on the southwest flank near the Marine Corps training center, but more aggressive on the southeast flank near Swauger Creek. On the northwest flank there have been spot fires occurring in Grouse Meadows and firefighters are having challenges gaining access in the difficult terrain. On the northeast side the fire is burning on both sides of Burcham Flat Road. Air and grounds resources have been actively working to slow its spread in that area.

No structures have been destroyed by the fire to this point. There are 30 residences considered threatened.

Highway 108 Sonora Pass remains closed at Kennedy Meadows. Highway 395 is closed between the communities of Walker and Bridgeport.

The incident command structure transferred over to a larger type two team this morning, led by Kim Martin, and it will help support additional resources that will continue to arrive over the coming days. Around 400 firefighters are currently on scene.

To view a map showing detours due to the highway closures, click here.