Yosemite Honors One Of Its Own 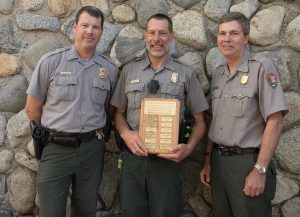 Yosemite, CA – Noting their awe at a park rangers abilities, his co-workers bestow him with a prestigious award – in fact it is Yosemite National Park’s highest honor awarded by peers.

Park Ranger Jack Hoeflich was given the 2017 Barry Hance Memorial Award last month in a ceremony attended by about 450 park employees, volunteers, park partners, and retirees, including several past recipients of the award. It is given to employees who exemplify the qualities and attributes of Hance, a long time park staffer who died in an avalanche while plowing the Tioga Road in 1995. Those qualities include team work, a positive attitude, concern for the public and fellow employees, public service, and a deep love for Yosemite.

Rangers who nominated Hoeflich say that he is the ranger who other rangers look at and ask, “How is he so good at all that stuff?” Hoeflich became a seasonal Protection Ranger in 2001 after working several seasons as a volunteer campground host and applying his advanced climbing skills to be a member of the Yosemite Search and Rescue team. He became a permanent Protection Ranger in 2005 with advanced credentials as a federal law enforcement officer, park medic, structural firefighter, wild land firefighter, technical rock rescue instructor, helicopter and swift water rescue technician and horse patroller.  In 2007, he received a Department of the Interior Valor Award for his heroic actions while rescuing a gravely injured climber from the face of El Capitan.

Hoeflich took the post of Valley District Ranger in 2012. His peers call him a “consummate professional in that he endeavors to be the best at whatever he does.”