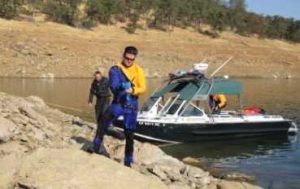 Tuolumne County, CA — Yesterday morning a fisherman spotted a body near the shore at New Melones Reservoir, and officials believe it is a man that reportedly drowned on August 18.

We reported earlier that 58-year-old Richard Matlock of Ceres went missing after jumping from a boat to take a swim without a life jacket. Outside agencies responded to assist in a multi-day search, however, he was not located.

The Sheriff’s Office is working to officially positively identify the body that was recovered yesterday. We’ll pass along more information as it becomes available.