Thumbs Up From Owner Who Got His Stolen Bike Back 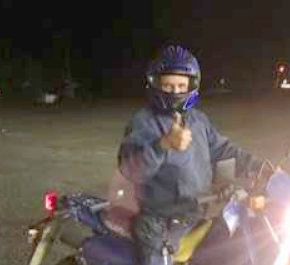 Jamestown, CA – A Sonora couple is behind bars after being arrested for stealing a motorcycle while the owner of the bike gives the thumbs up sign after Tuolumne County Sheriff’s officials reunited him with the bike, as pictured in the image box.

A passing deputy on Highway 108 in Jamestown early Thursday morning noticed a motorcycle at the Sierra Energy Gas Station with no license plates. He stopped to inquire why with the male driver, 40-year-old James Thurman Jr. and passenger 30-year-old Nichole Star. While questioning the pair, the deputy ran the bike’s VIN number along with a records check that revealed the motorcycle was stolen.

The two were arrested for having a stolen vehicle. A search of the couple turned up methamphetamine in Thurman’s wallet, which brought further charges of drug possession. He was also driving on a suspended license tacking on another charge.

The bike was returned to its rightful owner, who noted that the ignition had been altered and parts of the bike had been spray painted.