Update: Head On Crash Shuts Down Bridge On Highway 120 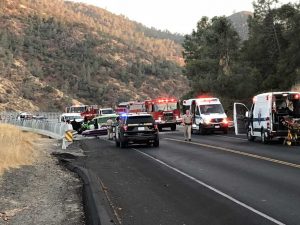 Update at 8:30 p.m.: The CHP is reporting major injuries in the head on crash  that sent four individuals via air ambulance from the scene. Traffic is moving freely once again on Highway 120. For more information on the crash see below.

Update at 7:45 p.m.: Traffic is moving again on Highway 120, but just on one lane as  tow crews work to remove the wreckage and debris. Further details on the crash can be viewed below.

Update at 7:30 p.m.: The CHP hopes to have traffic moving again in about 30 minutes on Highway 120. More details on the collision are below.

Update at 7:15 p.m.: Detours signs have been set up on Highway 108 and Highway 120 at the Jacksonville Road intersections as the James E. Roberts Bridge has been shut down due to the head on crash. Further details on the crash are below.

Update at 7:05 p.m.: The CHP reports that the individual pinned in one of two vans that hit head on along Highway 120 has been freed. Additionally, a fourth air ambulance has been called to the scene.  No details on injuries have been released.

Update at 6:50 p.m.: Initially, one air ambulance had been called to the scene of a head on crash involving two vans, but the CHP now reports that another two have been requested to land at the Vista Point on Highway 12o and the Jacksonville Road intersection. No details on injuries have been released.

Update at 6:40 p.m.: The CHP now reports that the wreckage is blocking the entire bridge and traffic is being turned around in both directions.

Two vans collided on the James E. Roberts Bridge blocking the westbound lane of the roadway. The CHP reports two other people were able to get out of the vans. There is no word on injuries, but an air ambulance has been called to the scene. We will bring you more details as soon as they come into the news center.

A special thanks to our community partner Jeremy Maddux for emailing the pictures and video.