A Close Call And Some Blowouts 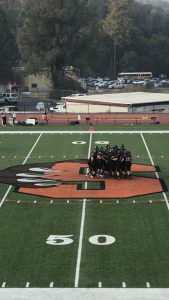 Week two of the High School Football Season featured a nail-biter and some bitter loses.

After a 7-3 season and a playoff appearance last year, the Bears we’re ready to start this 2018 campaign off on the right foot. Summerville fans were on the edge of their seats as the game came down to the wire in their home opener. With many star players from Summerville graduating, Head Coach Sean Leveroos relied on his returning running back Junior Nick Veach and his new found starting quarter back, sophomore Jayden Brocchini to become leaders of this year’s Bears team and this game was the first example of what those young men have to offer. In the first quarter both teams looked very shaky, unsuccessful drives lead to multiple punts and no scoring.

Starting the second quarter, Summerville’s defensive line looked great stopping the run. Octavian Hernandez covered both sides of the line of scrimmage very well making multiple tackles for losses. This run stop by Hernandez, Tres Machado and Cameron Trail put the ball back into Brocchini’s hands. From just outside the 50 yard line, Brocchini lined up in the shotgun and handed the ball out to the right to Veach who made a Grizzly defender miss and was off to the end zone for a 64 yard touchdown run – the only one in the game. To close the first half, Chris St John booted a 29 yard field goal attempt to make the score 10-0 at halftime.

The second half of this game was, for the most part, a stalemate full of fumbles and one interception. Thankfully these turnovers did not hurt Summerville too badly. Mariposa also had a difficult time running the football. Trailing by 7, with just 22 seconds left on the game clock, the Mariposa kicker missed the tying extra point wide right giving the Bears the 10-9 victory. Nest Friday Summerville plays Ripon Christian at home.

The Sonora High Wildcats dropped their home opener Friday night by the score of 34-0 to the Ripon Indians.

The first quarter was a slug fest. Ripon and Sonora offenses went back and forth using just the middle of the field. Neither team could seem to get close enough to break the plane of the goal line at Dunlavy Field leaving the score at zeros for both sides.

Ripon’s Nico Ilardi was the player that started the scoring in the second quarter with a 22 yard touchdown run and then later in the quarter broke open on a 67 yards scamper to take the score to 14-0 with the Cats trailing. Sonora went into halftime 20-0.

The scoring would continue for Ripon on another later big run of 46 yards by Brandon Rainer with the point after good to take the lead to 27-0. Ripon failed to convert on a 37 yard field goal during the third quarter and the score would remain 21-0 going into the last period of play.

The Wildcats would get close but fail to score in the fourth quarter. Ripon tacked on another seven points after a few broken tackles allowed the Indian receiver to twist free and win the foot race to the end zone from 31 yards out and the final score was 34-0. Next week the Wildcats return to Dunlavy next week to take on the Escalon Cougars. For game video, click here.

Other Mother Lode Teams In Action

A disappointing loss for Bret Harte last night as Truckee jumped over the Bull Frogs, 63 to 0. Bret Harte will take on Delta Charter next Friday at home.

Calaveras was defeated by Escalon, 21 to 7. They will host Modesto Christian next Friday.