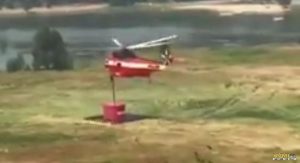 Update at 8:20 pm.: The flames of the Donnell Fire in the Stanislaus National Forest crept closer toward Kennedy Meadows Friday, but it was a good day for aircraft battling the blaze, according to Incident Command.

Both the acreage and conatinment held steady at 23,824 acres and five-percent containment. Spokesperson Maria Benech reports there was not a lot of fire activity today, but pointed out, “We did have movement mainly on the eastside moving within two miles of Kennedy Meadows. So, it is creeping down Highway 108. There was also more activity in the northeast side in those canyons out of Clark Fork.”

Benech also noted that there were two half acre spot fires south of 5N01, the Eagle Meadow Road, but those were quickly extinguished by ground crews. Aircraft was able to attack the fire all day. They were aided by a local snow park, which has set up a retardant station. More details on that can be viewed below along with other fire details.

Update at 6:30 p.m.: The Leland High Sierra Snowplay park has been enlisted in the battle against the Donnell Fire on the Stanislaus National Forest.

As pictures and a video shows in the image box, the grounds are being use as a retardant mix and distribution site. The Leland Reservoir supplies the water to mix the powdered retardant, which is poured in to a huge tank that helicopters are able to fly over and suck up the pink liquid.

Park officials say they “gladly entered into an agreement with the Central Coast Incident Management Team a few days ago to use the park as a retardant mix site for helicopter operations.”

Large pallets of retardant powder are stacked in the parking lot. Park officials relay that Leland Meadows is in a great position for the helicopters to quickly return to the fire and help protect structures and slow the flames. They eagerly share, “We are thrilled to have these crews working in our front yard!”

While we reported earlier that Spicer reservoir is closed for recreational use, the campgrounds around it are open. The Pacific Crest Trail remains closed between Highway 108 and Highway 4.

643 firefighters are now assigned to the incident. 220 structures are threatened. 55 major structures have been destroyed, along with 81 outbuildings. Also yesterday, Congressman Tom McClintock made a stop at base camp to hear an update on the fire fight. The latest size estimate remains 23,824 and there is 5-percent containment.

Original story at 9am: Tuolumne County, CA — More areas are becoming off-limits due to the 23,824 acre Donnell Fire burning in the Stanislaus National Forest.

This morning the US Forest Service issued an order closing the Carson-Iceberg Wilderness and Spicer Lake. The fire is considered 5-percent contained. We expect to have more information about the current strategies and the fire’s direction following the morning briefing at base camp. 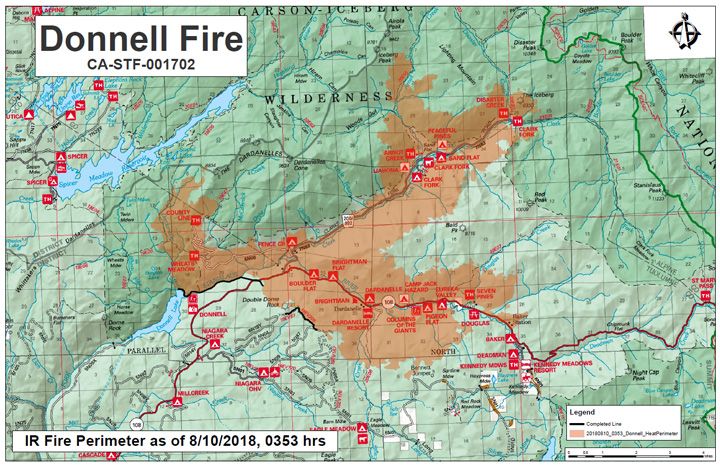