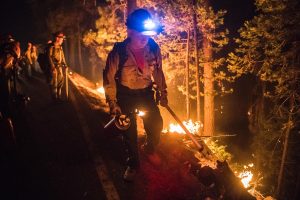 Update at 7 p.m.: The containment continues to inch up on the Ferguson Fire burning in Mariposa County. It is now 80 percent while the fire’s acreage remains steady at 95,104 acres this evening.

1,532 personnel that are currently battling the blaze which include 104 engines, 14 water tenders, 14 helicopters, 17 crews, 5 masticators (mulchers)  and 20 dozers. There have been 2 fatalities and 14 injuries to date. Ten structures have been destroyed. Overnight crews will focus on continued burnout operations to until Wawona road and Yosemite Valley is secure.

A timeline of Ferguson Fire news stories is here.

Update at 12:19pm: As officials gained 79-percent containment on Mariposa County’s Ferguson Fire, mandatory evacuation orders lifted for Foresta but only for residents.

This morning, those living in that community were allowed back in and directed to use the entry points at Highway 140 or Highway 120/Big Oak Flat Road. Officials add that the area remains under a fire advisory. Similarly, Yosemite Valley opened Wednesday for residents and employees only and that remains the case.

The fire is 95,104 acres. Containment means that the fire line will hold under normal conditions. The notable area still uncontained is from the tunnel on Big Oak Flat Road to Chinquapin. It is a main focus of the roughly 1,800 firefighters that remain assigned to the incident.

The only mandatory evacuation orders still in place are for Foresta and Yosemite Valley. However, employees and those that live in the valley were allowed to re-enter yesterday morning. Remaining main road closures include Foresta Road, parts of Highway 140 and Summit Road. In addition, there are some forest roads and trails closed in the Groveland Ranger District of the Stanislaus National Forest. Teams are also busy making repairs to many areas hit by the fire. This includes using heavy equipment to build water bars and bringing in vegetation to conceal signs of suppression activity.