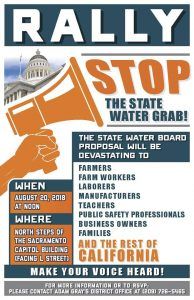 Sacramento, CA — Stakeholder groups in opposition to state water regulators’ intentions to double the volume of spring fish flows are circling the troops.

Democratic Assemblymember Adam Gray, who represents the Merced area, is busily circulating plans for a “Stop the State Water Grab Rally,” scheduled for Monday, Aug. 20 in Sacramento. The gathering is slated to take place from noon until 3 p.m. on the North steps of the Capitol Building, facing L Street. The event date falls a day ahead of the Water Board’s currently slated Aug. 21-22 meeting during which is anticipates approving a finalized plan.

The board’s final Bay-Delta Plan, if ultimately approved as is, mandates 40 percent unimpaired river flows from the Stanislaus, Tuolumne and Merced rivers. As reported in detail here, besides generating billions of dollars in economic impacts downstream, the flows potentially jeopardize the future of New Melones as a storage reservoir or recreation destination.

Among those bitterly opposed to what many stakeholders are calling a water grab, Gray states, “Despite thousands of comments on the draft, the Water Board made minimal changes and is still planning to double the amount of water taken from our rivers. If adopted, this will devastate our economy and our way of life.” He describes the rally as a last chance for those who oppose the plan to make their voices heard.

As we reported here yesterday, U.S. Department of the Interior Secretary Ryan Zinke, who recently visited New Melones and Don Pedro reservoirs, sent a deeply critical letter to the board. In it he requested more due diligence in reviewing and addressing potential impacts and also hinted at legal action.

Calling it “time to go to war,” Republican Stanislaus County Supervisor and former Assemblymember Kristin Olsen called the Water Board’s plan, during a recent supervisors’ meeting, the biggest threat to the community she has seen in 14 years as a public servant. In the meeting video she prefaced support for the protest event, opining, “I’ve never seen such a sinister, arrogant attitude from any state agencies.”

Also on board, the farm bureaus in Merced, Stanislaus and San Joaquin counties are collaboratively providing free bus transportation for protesters from stops in Merced, Turlock and Stockton.

The main information line for more details on the rally is Gray’s District Office at 209 726-5465.