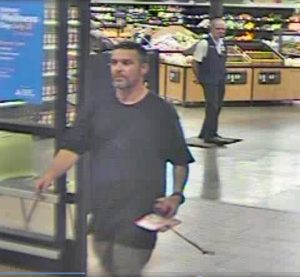 Sonora, CA – Sonora Police have put out an alert regarding phony Benjamins being used at a local store.

Pictures released by police in the image box show a suspect they believe was responsible for paying with a bogus $100 dollar bill last Saturday. He was caught on security footage leaving the Walmart store on Sanguinetti Road in the Crossroads Shopping Center in Sonora.

Police are turning to the public for help to catch this counterfeiter. Anyone who may recognize the suspect or have information regarding the fake money is asked to contact the Sonora Police Department at 209-532-8141. The names of those calling can remain anonymous, according to detectives.