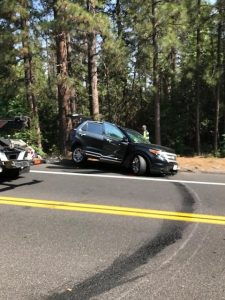 Crash on Highway 108 Near Twain Harte

Twain Harte, CA — The CHP has released new information about a head-on crash that occurred Thursday afternoon on Highway 108 between Twain Harte and Confidence.

An unidentified 19-year-old Soulsbyville man was driving a 1997 Subaru eastbound when he allegedly veered to the left, for an unknown reason, into the path of an oncoming Ford Explorer driven by an unidentified 71-year-old Oakdale woman. The two vehicles collided and the Soulsbyville teen had to be extricated from his Subaru by officials with the Twain Harte Fire Department. He was flown by air ambulance to Memorial Medical Center in Modesto to treat possible internal injuries.

The Oakdale woman, and her lone passenger, a 74-year old Oakdale man, were taken by ground ambulance to Adventist Health Sonora to treat minor to moderate injuries. The crash happened at 3:37pm near the intersection of Pine Acres Road.