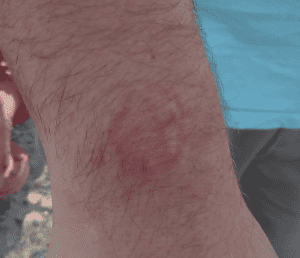 Sonora, CA — A bite mark was all the evidence Sonora Police Officers need to arrest a woman after attacking her ex-boyfriend.

The incident happened this weekend when officers responded to a domestic dispute in the parking lot of Timber Hills Shopping Center in Sonora. Sonora Police note that both individuals involved in the fight called 911 to report a custody issue.

Officers investigating the attack determined that 24-year-old Rayne Dehart of Sonora bit and hit her ex-boyfriend. The picture in the image box shows the visible injuries he suffered due to the argument. The red mark reveals a bite mark.

Dehart was taken into custody and booked at the Tuolumne County jail for domestic battery.