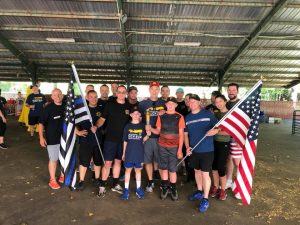 A special torch run started Saturday morning at the Red Church in Sonora and ended with festivities at the Mother Lode Fairgrounds. Washington and Stockton streets along the route were closed during the ceremonial run. The event also celebrated the first Tuolumne County Special Olympics athletes that will attend the US Summer Games in Seattle. Click here to read an earlier story about the event.