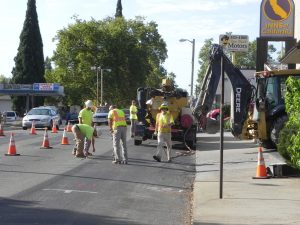 Columbia, CA – The public may notice smoke coming from the ground in the Columbia area tomorrow, but don’t be alarmed it is all in an effort by Tuolumne Utilities District (TUD) to cut down on cost.

TUD field crews will be cleaning and smoke testing its sewer collection system Thursday (May 31), which could cause smoke along Parrotts Ferry Road, near the Pedro Y, between the hours of 8 a.m. to 3 p.m. The testing, according to TUD officials, is being done in an effort to limit the cost of treating rainwater at the sewage treatment plant and pumping costs at lift stations.

What is smoke testing? TUD officials explain that crews will inject smoke into a blocked off segment of pipe to see if it escapes along the line; if it rises out of the manhole covers the main is in good condition. In turn, breaks in the line produce vapors and help pin point line defects. Sightings of smoke plumes coming from street cracks or yards are also not uncommon, according to TUD.