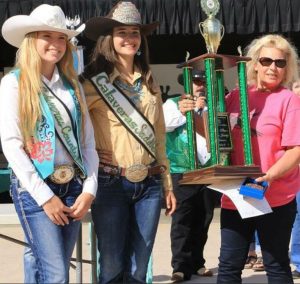 Angels Camp, CA — The results of this year’s Calaveras County Fair and Jumping Frog Jubilee reflect another successful year, aided by nearly perfect weather along with a spectrum of attractions and events.

While the still unaudited attendance total for this year, 30,875, is just shy of last year’s 31,172, Fair CEO Laurie Giannini reports that admission and parking income is up from 2017 and the livestock auction drew over $610,000. For the history books, she adds, “This year was awesome — our entertainers were great…the mounted Highway Patrol was a really cool addition to our year and it was the [Frog Jump’s] 90th birthday and as you know, the birthdays are always fun.”

As far as the Frog Jump Finals went, it was another win for the Kitchell Family Frog Dynasty as Laura Kitchell and her frog Reckless edged out a two-and-a-quarter inch victory over last year’s champion Justin Fasano, whose 2017 performance was filmed and featured in an ESPN-aired special clip, as reported here. Kitchell family member Morgan Kitchell won in 2016 and Riley Kitchell claimed the towering trophy and belt buckle in 2015 as well as in 2013.

The 1986 world record, set by Rosie the Ribiter and frog jockey Lee Giudici of 21′ 5 3/4″ remains unbeaten. For a tour of the Frog Spa under the competition’s stage, click here.

Sunday’s events wound up with the also popular Destruction Derby in which Mountain Ranch resident Tanner Joses defeated Calaveras County Sheriff Rick DiBasilio, who was driving the Friends of the Fair vehicle.