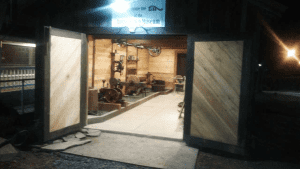 Jamestown, CA — Two years in the making, the Jamestown Museum swings open its doors to the public for the first time this weekend for a limited look: hours are Saturday only from 10 a.m. until 3 p.m.

According to Jim Gormely, Rocca Park’s self-described project manager, volunteer docents will be on hand to share their local knowledge and help explain the nature of the exhibits. At this point, he says, as a schedule has not yet been worked out the museum will have irregular hours that will depend on docents’ availability.

Describing the new attraction as a great asset, he shares, “It was a community project — it’s Jamestown history…the mining, the cattlemen, the lumber — all the different industries that were in place back in the 1800s — this museum will help bring a lot of this history out so that the public can understand it.” Equally impressive, he points out that all the planning, building and outfitting of the facility, located in Rocca Park at the heart of the downtown area, was a 100 percent community endeavor completed with no government monies.

A Museum Of Many Moving Parts

Among the unique attractions is a working line of belt-driven circa 1870s shop equipment from the Rocca ranch off Algerine Road. Originally powered by a gasoline engine sold through the 1870 Sears Roebuck catalog, the now refurbished tools run on an electric motor tucked in behind the original engine.

In fact, the museum building itself was crafted as an exact replica of the Rocca blacksmithy used by the family and local ranchers. The shop housed tools and machinery that were considered unusual and on the leading edge for the time. John Viglienzoni, great-grandson of family patriarch Giovanni Rocca, inspired the museum project with his desire to preserve the shop’s history by salvaging and donating its wood siding and original equipment. As reported here, organizers outlined the project two summers back, sharing images of the salvage work.

“When I was first introduced to the project…I went out [to the shop site] to see what this was going to entail and what I found was the building had already collapsed and all this historical equipment was all sitting in the field with wildflowers growing all over it,” Gormely recalls. “One more year in the winter rains that a lot of this equipment was going to be damaged where it could not be saved. Moving it all out of the elements was the first order of business.”

A little more about ranch founder Giovanni Rocca, who originated the blacksmith shop. An Italian immigrant who arrived in Jamestown at age nine, he initially worked a mining claim on Woods Creek with his father Lazaro and later opened a local merchantile store. After acquiring the Algerine property, he built a home there before 1875 whose ground floor was used as a saloon, stage stop and grocery. As he accrued more acreage, his family expanded into other local industries as they cultivated fruits, vegetables, a vineyard and grain fields also raising livestock.

Gormely, who headed up the ways and means these past two years, spent untold hours orchestrating donations and helping marshal the labor supply; including by tapping the county probation department and jail for work-release dirt movers, trench diggers and nail pounders. In all, he estimates probably a hundred pairs of helping hands were involved. Overall, he estimates the project took $95,000 in donations of which probably 70 percent were in-kind supplies, goods and services.

Besides the Rocca family, Gormely says kudos are particularly due to Tom McMullen, who helped restore the Rocca Park gazebo, for serving as the museum’s lead carpenter; local historian Joe Sparagna, the museum project’s curator; Mick Grimes, who handled the finances; Sonora Area Foundation, which channeled donations and Jamestown Promotion Club for overseeing the checkbook.