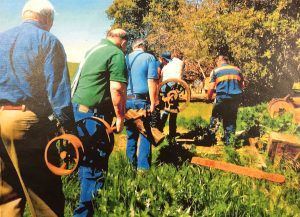 That should come Aug. 2, according to museum project manager Jim Gormely, when the item comes up on the Tuolumne County Board of Supervisors’ agenda.

Gormely confides that although the idea for a Jamestown museum has been bandied about for years, Promotions Club members got serious about it early this year. So, back in March, he put a plan and cost estimate together and began making presentations to the county’s historic preservation review commission. He adds that the supervisors have already approved the “nuts and bolts” of the project.

Eyeing An Opening In Early 2017

“All the engineering…drawings…landscape planning is complete and the county building department is ready to issue permits after that supervisors’ meeting,” Gormely grins wryly. The site prep work, which includes laying a concrete pad, is expected to get underway perhaps later that week. He estimates the $70,000 project will take five months, which means that a formal dedication may come as soon as early 2017.

The new Jamestown Museum, which will be tucked into Rocca Park off Main Street, to the left of the gazebo, will resemble a historic and rather intriguing blacksmith building and machine shop formerly located on Rocca Ranch. By donating the building components and contents, Rocca Ranch descendant and owner John Viglienzoni is also giving the museum a nifty design theme, according to Gormely.

Back in the day, as Gormely points out, the outbuilding was a draw for ranchers from around the region, who made use of equipment and a set-up that, at the time, were considered extraordinary; far beyond what anyone else had. Interestingly enough, he shares, original wood and components from the structure will be incorporated into the construction of the new building. Even more noteworthy, the circa 1870 “innards” of the Rocca Ranch building, including early automated machinery and a gasoline engine now being restored, will be reassembled inside to serve as a core attraction.

A retired electrical project engineer, Joe Sparagna developed the building plans for the 480 square-foot museum as well as the mechanical concept of how the original shop worked so it can be re-implemented. “We are going to make everything work that we can but there are a lot of restrictions on using gas engines inside, so we may have to work around that,” he explains. (For renderings of these and other plans and images shared by the organizers of the reclamation effort, click into the slideshow in the left image box.)

“We will make it look like the Rocca Blacksmith Shop that was automated back in the 1870s in one part of the museum — and we have all the original equipment,” Sparagna enthuses. Along with the equipment, the museum will feature a good bit of historic information, artifacts and pictures highlighting agriculture, gold mining, transportation and tribal elements.

Other locals intimately involved with the museum effort include Brian Kermeen, who provided the site design, Steve Willy, owner of the National Hotel, who is helping marshal volunteers, and Mick Grimes, who is helping spearhead the fundraising effort. Besides welcome cash donations, the organizers continue to line up in-kind donations of materials and labor. “I think, once the public hears about it — just like on the [Rocca Park] Gazebo Project, once they started hearing about it they started showing up to say ‘how can I help’ –it will be the same thing,” Gormely says assuredly, albeit with a hint of hope. Folks interested in lending a hand may give him a call at 532-6515.