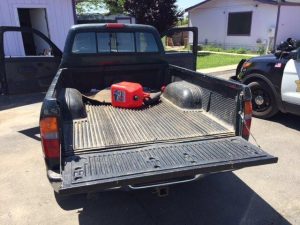 The sheriff’s high risk supervision team was carrying out a probation search on 46-year-old Narrie Alfaro at her Hitchcock Court residence in Jamestown Thursday morning when they discovered evidence of a vehicle theft. A check inside a Toyota Tacoma truck parked in front of the home showed clear signs it had been hotwired as there was damage to the steering column and several wires were exposed. A records check revealed the pickup had been taken from Murphy’s in Calaveras County.