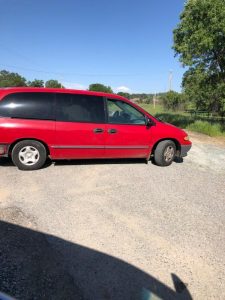 Van the vandal was driving

Angels Camp, CA — Angels Camp Police have released pictures of a suspected vandal’s van in hopes the public will recognize it and in turn lead them to the man want for tempering with home’s gate.

A Whittle Road home owner watched as a male stranger tried to break-in to her property by cutting a lock and disabling an electric gate on Thursday around 4:30 p.m. Detectives describe the man as possibly Hispanic, approximately 5’10” and wearing blue coveralls. When the property owner confronted the suspect, he took off in the 1999 red Dodge Caravan, with the resident giving chase. While calling 911 and with camera in hand, snapping pictures that can be viewed in the image box, the women tracked the van to the 600 block of Tuolumne Avenue in Angels Camp where the man parked and went into a home.

Officers, along with Calaveras County Sheriff’s Deputies, arrived at the home and questioned a woman inside, 32-year-old Jessica Pacheco. As seen in the pictures, the van’s license plate was unreadable as it was installed backwards, but she revealed the license plate number as 4HAY679. Records showed the registered owner was Vallecito resident David Copeland but Pacheco admitted she borrowed the vehicle from another subject, who she refused to identify. Pacheco was uncooperative and also would not reveal the name of the vandal suspect.

Anyone with information on the van or the suspect is asked to call detectives at 209-754-6500.