Democrats: March For Our Lives Must Continue 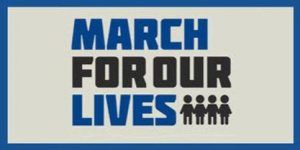 March For Our Lives logo

During the Democratic Weekly Address, Senator Cory Booker (D-NJ) discussed the the recent March for Our Lives.

Booker was Tuesday’s KVML “Newsmaker of the Day”. Here are his words:

“Hello. I’m United States Senator Cory Booker from the state of New Jersey. About a week ago, hundreds of thousands of our fellow Americans went out and marched to demand action on gun violence in America. This was not a right or left, Republican or Democrat. This was a movement about right and wrong. These were Americans joining their voices together in a hallowed tradition demanding freedom, and in this case it was freedom from mass slaughter, freedom from fear, freedom from preventable violence. People stood together, marched together, lifted their voice in this American tradition, where change does not always come from Washington, it must come to Washington by citizens standing up and demanding change.

And what they’re yearning for is not out of the margins of what we all believe. Most Americans, gun owners and non-gun owners, Republican and Democrat, old and young agree that there are commonsense things we can do to drive down gun violence in our country. Closing loopholes that allow people with ill-will – that allow criminals to obtain guns, whether it is domestic violence loopholes, or background check loopholes that allow people who are even suspected to be terrorists to still load up trunks full of weapons in our country. There are still people that understand that we need to focus on these problems, do what we know will make a difference.

That’s why people marched, because they know that the resistance to change, the small minority stopping us from marching towards safety, they are on the wrong sides of history. They don’t understand that they are blocking what in this country we’ve been fighting for from the beginning. We formed this government for our common defense. We formed this nation because of our faith in the ideals of liberty and justice for all – of life and liberty, and the pursuit of happiness.

This is a problem that American people can’t ignore. This is a problem that American people must demand that we confront. This is a problem that I believe that I know we can change. This is a personal problem – personal challenge for so many Americans. When I go home to my community – just two weeks ago when I was there, a young man that I knew, Shahad Smith, was killed by an assault weapon at the top of the block that I live in. He was murdered by an assault weapon that I don’t believe should be in streets and communities like the one I live in. We lived together in the same building for ten years, and unfortunately I’ve seen Shahad and others of his friends, young men that I knew get killed by gun violence. This is something that is continuing to cut and scar the moral core of our country. That these young men should be dying – that don’t even trigger headlines has become so normal in our nation, so normalized. We have to stop this madness.

And so let me be clear. Let us not stop. Let us continue this movement until change comes. Let us honor our ancestors who fought for our civil rights, our voting rights, for our working rights by continuing the advancement towards freedom. Let us protect the homeland, let’s protect our communities, our families, our schools, our movie theaters, our churches. Let us be soldiers in this peaceful army. This is a movement that should unite all Americans, it should not divide us. This is a movement that reflects our hallowed traditions, and it is a movement that I know is on the right side of history.

Let us continue in our fight. Let us not be moved, as we march in the right direction. Let us bring safety and security to our communities. Let us hail the truth of our nation, that we are a place that treasures life, that will preserve liberty, and that will find for every community, from Newark to Newtown, from Camden to Columbine, from Paterson to Parkland. That we are a nation that every one of our communities is safe, is strong, and resonates with the hope and the promise of America.

Thank you very much.”