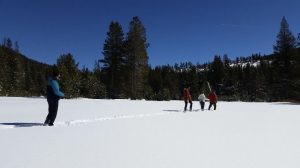 Sacramento, CA – This most recent winter storm over the Sierra Nevada added some modest bulk to an otherwise meager snowpack previously estimated at roughly a quarter of its normal average.

Runoff from the snowpack historically supplies California residents with a third of their annual water supplies although scientists say that climate change impacts are reducing that. Today Department of Water Resources (DWR) officials were able to get out to do the late-winter snowpack measurements four days later than usual, due to the storm that arrived late last week and continued through much of the weekend in some parts, dropping up to eight feet of new snow in some areas.

DWR scientists subsequently determined that the overall snow water equivalent (SWE) is currently measuring at 9.4 inches — or 37 percent of normal for early March. Somewhat softening that news, DWR spokesperson Doug Carlson explains, “What we are seeing here is a that reasonable storm over the weekend added about five inches of water content to the snowpack since last week…normally on this date you should have 27 inches of water content in the snowpack…so it is not looking great.” He ruefully adds, “It is better than what it was last week but only looks good now because of how dismal February was all up and down the state.”

The snow survey conducted today by Frank Gehrke, chief of the California Cooperative Snow Surveys Program, was the second measurement at Phillips Station near Lake Tahoe for this season’s snow survey period. In addition to the manual survey there, DWR logs electronic readings from 103 stations scattered throughout the Sierra. Electronic measurements taken today currently indicate the SWE of the northern Sierra snowpack is 7.4 inches, 30 percent of the multi-decade average; the central and southern Sierra readings are respectively 11.5 inches (43 percent of average) and 8.7 inches (37 percent of average).

Asked about how the chances are for the state to somehow catch up over this next month, Carlson confides, “The people who really track these things say that you could really forget about having a ‘miracle March’ getting us back to average this year. We are only at about 37 percent of average and if we look at what the April 1st average is –- which is sort of the high watermark of the snowpack –- we are only about 34 percent of the April 1st average as of now. So we would have to really ramp it up with a lot of atmospheric rivers with cold temperatures so [precipitation] would not fall as rain…I do not know if anyone is predicting that kind of March yet.”

State weather experts say at this point in order to reach the “normal” winter precipitation benchmark by April 1, six more storms like the latest would need to occur; something that the National Weather Service estimates as a 1-in-50 probability.

Ironically, it was near-record rains that just last year pulled the Golden State out of a historic and devastating drought that forced state and local conservation mandates and water supply program assistance program rollouts to those with dried up wells. The drought also helped trigger a wide-ranging tree mortality disaster and contributed to already hazardous wildfire conditions. As of March 1, the U.S. Drought Monitor map showed most of Southern California as experiencing moderate to severe drought conditions. The rest of the state – that is, except for a thin slice of the Northern California coast – showed as measuring within abnormally dry conditions.

All things considered, Carlson simply states, “We are still so far away from the averages that we should see in the water content of the snowpack is that the old advice still holds true: Californians should adopt a water conservation way of life — it is the best way to live in this Mediterranean climate that we all love.”