Update: Late Night Fire At Be Wok And Sushi Restaurant 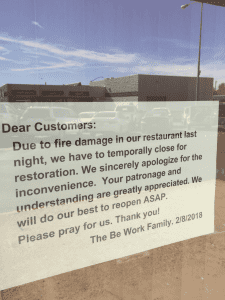 Update at 11:33 a.m.: A late night fire at one of the Mother Lode’s favorite restaurants looks like it will keep it from re-opening for a few days at the very least.

A family spokesperson for Be Wok and Sushi owners Bonnie and Ping You recounts that they were alerted around midnight of a blaze that apparently began in the kitchen of the Sonora Plaza Shopping Center restaurant and may have been possibly related to some wiring. An investigation is still underway to determine the exact cause although at this point it is not believed to be human-caused.

Late this morning the spokesperson, speaking with Clarke Broadcasting, says the family is still awaiting an insurance investigator to make a site visit after which they can begin cleaning up the kitchen, throwing out all the food and repairing damage, much of which looked to have happened during the firefighting effort.

During the interview several locals walked up to the front door where signs have been posted, Intending to have lunch they instead offered condolences and hopes that the eatery would soon reopen. A county health inspector also made her way in for a site visit. While at this point, it is too early to estimate, the owners say they will be working with officials to try to get open as soon as possible.

According to family members, firefighters appeared to have arrived quickly in the 11 o’clock hour, initially gaining entry by breaking the front door glass, and had the incident under control within an hour. While the kitchen appeared to be fully functional, utilities had to be cut off during the incident and for inspections at the scene that are still ongoing. A distinct smell of smoke was discernible from the front door but looking in from there the restaurant looked virtually undamaged and the glass doors have already been repaired.

Be Wok and Sushi, now in its tenth year, has consistently rated among locals as the top Chinese restaurant. With Valentine’s Day coming next Wednesday, traditionally for them a very good business day, the family says they are also disappointed that it is quite possible they may not be able to help their customers celebrate the holiday this year.

Original Post at 7:42 a.m.: Sonora, CA — Firefighters were busy late last night putting out a fire that ignited at a Sonora restaurant.

The Sonora Fire Department was notified shortly after 11:30 p.m. that a fire ignited at the Be Wok and Sushi restaurant at 764 Mono Way. Other agencies also responded to the incident. Fire officials report that it was contained to the kitchen area, but there was also some smoke damage. What ignited the fire remains under investigation. We’ll pass along more details when they become available.