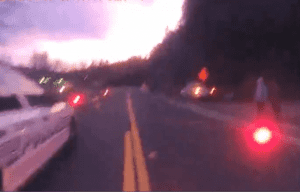 Sonora, CA – A smashed up bike and broken eye glasses in the roadway marked the spot of a vehicle versus bicycle crash in Sonora that sent one person to the hospital.

Sonora Police report that a bicyclist swerved into oncoming traffic in the 600 block of Stockton Road around 7:15 p.m. Thursday. Both the bike and a 2005 Hyundai Elantra sedan were heading westbound near the Mother Lode Fairgrounds second entrance when police say the bicycle rider darted into the lane hitting the passenger side door, which sustained a scrape and dent at the point of impact.

The man on the bike suffered minor injuries and was treated at a local hospital. The unnamed female driver was not hurt in the collision. Police indicate that it does not appear that drugs or alcohol were a factor in the crash, which remains under investigation. Anyone who may have witnessed the accident is asked to contact the SPD at 209-532-8141.